In a major milestone for Eastland, Charlotte begins rezoning for Major League Soccer

The city of Charlotte and Crosland Southeast have filed a rezoning petition for the Eastland Mall site and an adjacent property to allow residential and commercial development as well as a Major League Soccer headquarters.

The petition, filed Wednesday morning, calls for three development areas across 78 acres to be rezoned to MX-2, which permits residential mixed-use development, and MUDD-O, or mixed-use development district with optional provisions. The city owns 69 acres at the Eastland site, and the rezoning petition also includes an adjacent 8-acre parcel — the former Hannaford grocery store site — that master developer Crosland Southeast has under contract.

The Eastland site, owned by the city since 2012, is mostly sprawling surface parking left from the mall. A portion of the site is used as an open-air market on the weekends, and the Charlotte Area Transit System operates a transit center there, but the property is otherwise dormant.

Multiple attempts since Eastland Mall’s demolition in 2013 have been made to redevelop the property, but all have been unsuccessful. In fact, despite earlier plans calling for a range of projects — such as a ski slope-anchored entertainment district and a movie studio and film school — the property hasn’t been rezoned since the mall was developed.

While the rezoning petition filed this week does call for potential uses like residences, offices and hotels, typical rezoning details such as maximum number of housing units or square footage for development were not included. That’s because the city is still hammering out a master development agreement with Crosland Southeast, which was selected in 2018 to lead the redevelopment of Eastland.

“We are just trying to get the land uses in place that are going to respond to the vision we laid at a high level,” said Tracy Dodson, assistant city manager and head of the economic development department.

Giving the Eastland project momentum is Carolina Panthers owner David Tepper’s plan to bring a practice facility and headquarters for Major League Soccer — the 30th franchise of which is Charlotte bound — to use about a third of the property. That section, deemed “Development Area 2” on the site plan, would be on the southeastern edge of the property, near Central Avenue and Albemarle Road. It would include up to a dozen soccer fields, some open to the community. The MLS team would play matches in uptown, at Bank of America Stadium. 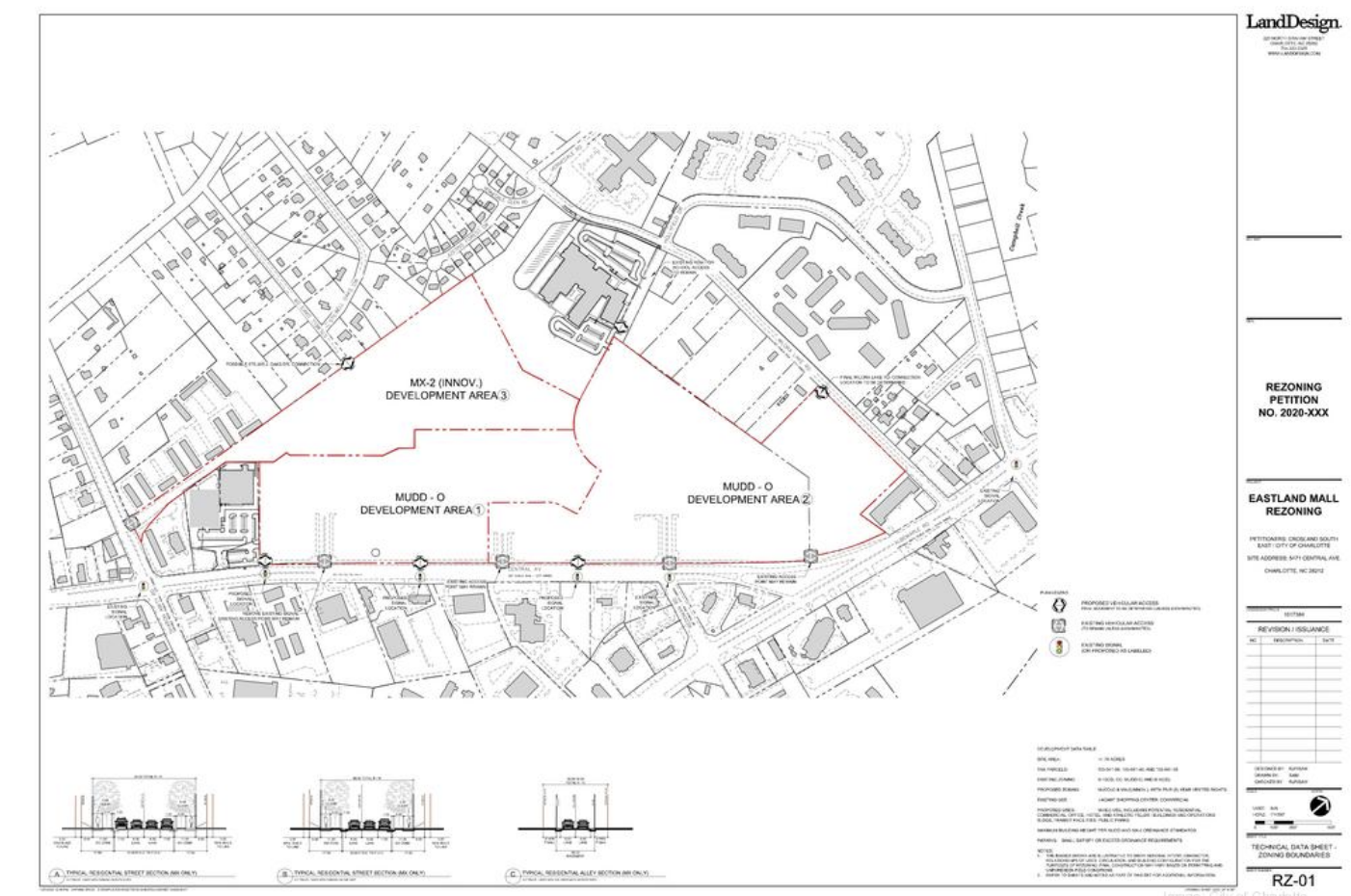 The city is negotiating an agreement with Tepper Sports for the Eastland MLS facility. Even before Tepper formally landed the team in December, Crosland Southeast envisioned a sports component — likely soccer — at the property.

“This is a pretty important milestone that we’re reaching here,” said Tim Sittema, managing partner at Crosland Southeast. “We’ve been working behind the scenes for a long time, but this is the first public signal that our plans are advancing well to get to this stage.”

Sittema said his team and the city have held at least 14 community meetings so far to map out the future of Eastland. While specifics such as the amount of development are to be determined, the idea is to have a mixture of housing — for rent and for sale, with varying density — as well as space for retail, restaurants, office users and potentially a hotel.

Plans also call for a public park and a greenway connection. Sittema said his firm is in conversations with Mecklenburg County about the park, so details such as size or potential design are not yet available.

On the line for Tepper’s MLS team in Charlotte is $110 million in tourism tax revenue. That money still has to be approved by Charlotte City Council but is expected to help fund multiple MLS projects including, likely, the Eastland facility as well as an uptown entertainment district near Bank of America Stadium.

Dodson said this week that she didn’t know how much of that $110 million may be used for Eastland.

Eastland needs significant infrastructure work — grading the land and removing acres of asphalt; building new roads, including a main street that would serve as the project’s primary commercial corridor; adding traffic signals; and rerouting water and sewer lines. That work wouldn’t likely begin until agreements with Tepper and Crosland Southeast, as well as the rezoning petition, are approved by council, but it is expected to start before the end of this year, Sittema said. Infrastructure agreements between the city and Crosland Southeast, such as a tax-increment grant, are being considered to help pay for those projects.

That’s another reason why the MLS facility can’t break ground at Eastland until 2021 — the same year the team is expected to begin playing in Charlotte. It will have a temporary facility elsewhere in town as the permanent center at Eastland gets built, but it’s not certain yet where the team may practice in the interim.

Vertical construction of the first phase of development — which will include market-rate apartments and for-sale housing, as well as food and beverage retail — would probably begin in mid-2021 and deliver by late 2022, Sittema said. The development is likely a multiphase project, but Sittema said the firm believes there’s potential for office down the road, as well as a hotel, depending on the market.

The western portion of the site, fronting Central Avenue, will be developed with a mix of commercial space and residences, with the lowest-density residential adjacent to existing single-family homes near the back end of the site, away from Central.

Dodson said a community meeting is scheduled for March and that a City Council public hearing for the rezoning wouldn’t occur until April at the earliest. A vote on the petition, therefore, wouldn’t take place until May or later, during a council zoning meeting.

So far, the city and Crosland Southeast have met with more than 700 people in the community on the future of Eastland, and the meeting in March won’t be the last.

Area residents have been eager for the Eastland site to be redeveloped, but there are also concerns that new development could make the area — one of the most diverse in the city — more expensive and lead to displacement of the small, local businesses that east Charlotte is known for.

“This Eastland site isn’t the end all, be all for the entire east side,” Dodson said. “It’s a start for something new and something the community has asked for over the years — but I think we have to be very diligent about where it goes from here and what that means for the surrounding community.”

Read the original article in the Charlotte Business Journal.