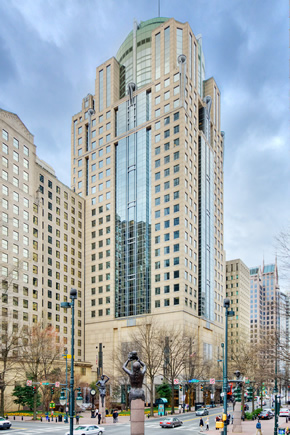 James, as Senior Vice President, Project Management, is responsible for all design, development and construction for the company’s projects.  Hebard, as Project Manager, will focus on additional single-tenant assignments and will oversee day-to-day construction of Stonebridge, a redevelopment of the former 1 million square foot Cloverleaf Mall in Richmond, Va., which was recently named Virginia’s Best Public/Private Partnership of 2012 by the Virginia Business publication. The 83-acre mixed-use development has given a desperately needed economic jolt to the region. Kroger’s largest store in the Southeast, a 123,000-square-foot Kroger Marketplace, will serve as the anchor when it opens late this year.

Crosland Southeast Partner Mike Wiggins is enthusiastic by what James and Hebard will bring to the company’s growing portfolio of projects, which includes $250 million in the development pipeline. “Barry is a significant addition with a strong pedigree in design and development, and he elevates our development capability, including medical office and industrial,” Wiggins said. “Mark brings tremendous boots-on-the-ground experience to Stonebridge, one of our larger projects under development.”

As Senior Vice President of Project Management, Barry James is energized to have projects not only in predevelopment, but also under development such as Quail Corners in Charlotte, N.C. and Flowers Crossroads in the Raleigh MSA.  He will also assist Beth Middleton, Senior Project Manager, in overseeing construction for the redevelopment of Quail Corners and is responsible for the construction of Flowers Crossroads, a recently announced Harris Teeter-anchored shopping center.  In addition, Middleton is managing construction for one of Crosland Southeast’s most active single-tenant relationships, Family Dollar, for whom Crosland Southeast is currently developing stores across the Carolinas and Virginia.

James comes to Crosland Southeast after 13 years at American Asset Corp. in Charlotte, where he was executive vice president in charge of development and project management. While there, he was responsible for the development of 3.7 million square feet of retail, office and industrial property, as well as planning 1,000 acres of mixed use projects in North and South Carolina. In a career spanning more than 20 years at several companies including award-winning architecture firm RTKL Associates, he’s been involved in mixed-use and retail projects in the United States as well as China, Germany, Korea, Spain and Dubai in the United Arab Emirates.

Hebard most recently worked as a project manager for Cannon Pharmacy/Livewell Inc., overseeing the design and construction of new pharmacies from lease negotiation to close-out. He also managed the renovation of existing stores. Before that, he worked at Shelco Inc. as an assistant project manager which afforded him valuable experience from the general contractor’s perspective.

Today, Crosland Southeast perpetuates the excellence of the legacy company with its emphasis on retail acquisitions, advisory services, single-tenant development and the development of high-quality retail and mixed-use projects.  In addition to Stonebridge, the team is currently developing such projects as Blakeney Square, the final phase to the 260-acre Blakeney development in south Charlotte, along with a very active single-tenant build-to-suit pipeline.

During their tenure, the team has developed over 24 million square feet of retail space.

Notable past developments include The Shops at Greenridge in Greenville, S.C., Biltmore Park Town Square in Asheville, N.C., Providence Marketplace in Nashville, Tenn., and Birkdale Village and Blakeney in Charlotte, N.C.  For more information, visit www.croslandsoutheast.com.