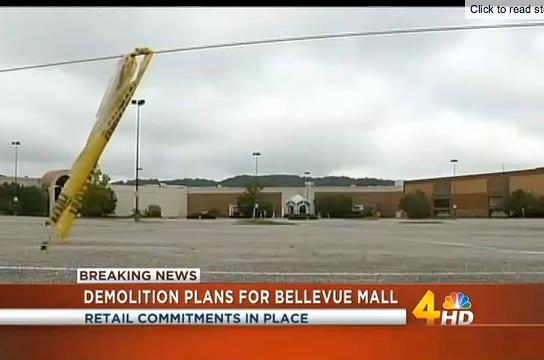 The long-dormant Bellevue Center mall’s days may be numbered.

Developer Crosland Southeast presented its preliminary plans for the mall site, which includes demolition of the existing structure, at a community meeting Thursday at Cross Point Community Church.

“Our plan for that project is to redevelop it into a mix of uses, including retail, including hotels, including residential multi-family,” said Tim Sittema, managing partner with Crosland Southeast.

Retail will drive a large part of the $100 million plan for the mall property. Developers told Channel 4 they are planning 500,000 square feet of retail space.

Crosland Southeast said it already has commitments, but can’t reveal which stores just yet.

Many have asked what’s next for the Bellevue Center since it closed in 2008. Several ideas have been floated, but so far, nothing has caught on.

To many who live in Bellevue, the building has become an eyesore.

Those who attended Thursday’s meeting seemed pleased with the plan.

“I love the layout of it,” Langan said. “I love the walkability of it. I love the mixed-use of it.”

“I know it’s going to take a long time from what they said,” said Ian Black, who works in Bellevue. “A lot can happen in that time period. I’m optimistic.”

Developers hope to break ground next year, with completion sometime in 2017 or 2018.